Below is helpful info about transferring credit from our dual credit course to your university.


Usually, the process to transfer credit is to go to Loyola's website and request a transcript.  Then you send in a copy to your university and you request credit.  But I would call the admissions office of your university to be sure.  Sometimes they want the following info:


Syllabus:  I will attach a link to the syllabus here.
Title:  the course title from Loyola is SOCL101; Society in a Global Age
Text:  The class uses the text Real World Sociology by Ferris and Stein 6th Ed.
Readings: Just Mercy by Bryan Stevenson.  Course Packet with selected readings.


Help from Loyola with transcript:
This link explains transferring dual credit specifically for high school students in the Dual Credit program.
And this link, also posted below explains how to request transfer credit in general for Loyola students:

https://locus.luc.edu/pa91prd/locus_help/Requesting_an_official_Transcript.pdf​
Don't remember your login?
I would try either:
1. Password self-service reset here.
or
2. try this: https://transcriptrequest.luc.edu/alumni/pages/jsp/
or
3. Call the Office of Registration and records at 312.915.7221


General Info. about schools accepting credit:
Finally, here is a database from the U of Conn about what colleges accept dual credit.
Posted by SociologySal at 1:50 PM No comments:

So you want to learn more about race or racism? Here's recommended reading...

Posted by SociologySal at 11:57 AM No comments:

And found on Ranker here: https://www.ranker.com/list/famous-people-who-majored-in-sociology/reference

And from Soc Images, an exploration into the sociology major and athletes here

Michelle Obama, lawyer and First Lady of the United States

Cory Anthony Booker, an American politician and the junior United States Senator from New Jersey, in office since 2013. Previously he served as Mayor of Newark from 2006 to 2013.

Nina Dobrev, actress and model, played the role of Mia Jones, the single teenage mother, on Degrassi: The Next Generation, from the show's sixth to ninth season. Since 2009 she has starred as Elena Gilbert on The CW's supernatural drama, The Vampire Diaries.


Arne Duncan is an American education administrator who has been United States Secretary of Education since 2009. Duncan previously served as chief executive officer of the Chicago Public Schools district from 2001-2009

Chante Stonewall is a Depaul University Women's basketball player, and the
Big East scholar-athlete of the year, 2020.

Posted by SociologySal at 8:00 AM No comments:

What would I do if I majored in sociology? There are lots of ways you can use a sociology major and of course, many people end up working in an area that has nothing to do with their major anyway. Sociology is great for anything having to do with people and data or different groups of people.


Some of the jobs that I have heard recent sociology majors doing are:
Here are some resources:

For majoring in sociology:
This is from the American Sociology Association's website:

The 21st century labor market is fast changing, increasingly global and technology-driven, the jobs that you may apply for as a graduate may not even exist yet. To navigate the 21st century means being able to keep up with the changing world.
As society evolves, you as a sociology major will have the tools to critically analyze the world and your place within it.

This page from Huffington Post will help allow you to explore why some students majored in sociology, what skill sets sociology students learn.

Here's a post from Everyday Sociology Blog about majoring in sociology.


Also, for finding jobs in sociology:

This is a link to the ASA page on jobs.  Here is a brief overview of where sociology majors end up after they complete their bachelor's degree. 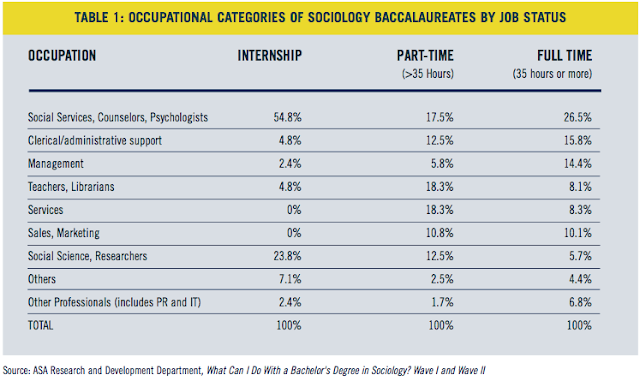 Here is a video about careers in sociology, embedded below:

Research on Digital Devices in Class

https://sciencedirect.com/science/article/pii/S0360131512002254
Laptops are distracting in class and detrimental to other's learning - they are the second hand smoke of learning.

https://www.chronicle.com/specialreport/The-Distracted-Classroom/120?cid=RCPACKAGE
Every day in class, faculty members wage a constant battle with cellphones and laptops for the attention of students. In this series, James M. Lang explores the impasse over how to cope with those unwanted digital distractions.

http://time.com/3855257/cell-phone-ban-school-test-score/
Exam scores climbed by as much as 6% in schools that imposed strict bans on cell phones, according to a new study that cautions policymakers to keep strict cell phone policies in the classroom.
Researchers at the University of Texas and Louisiana State University surveyed cell phone policies across schools in four English cities since 2001, studying how exam scores changed before and after the bans were enacted.
“We found the impact of banning phones for these students equivalent to an additional hour a week in school, or to increasing the school year by five days,” the study’s authors wrote on the academic blog, The Conversation.

https://www.sciencenewsforstudents.org/article/when-smartphones-go-school
“Texting on things that are unrelated to class can hurt student learning,” Kuznekoff found. Overall, the control and class-related-message groups did 70 percent better on the test than did students that could text and tweet about anything. That control and relevant-message groups also scored 50 percent higher on note-taking.
“You’re putting yourself at a disadvantage when you are actively engaged with your mobile device in class and not engaged in what’s going on,” warns Kuznekoff. His team shared its findings in the July 2015 issue of Communication Education.

https://www.theatlantic.com/education/archive/2016/04/do-smartphones-have-a-place-in-the-classroom/480231/
The findings of a recent study on student phone access and the achievement gapby Louis-Philippe Beland and Richard Murphy for the London School of Economics and Political Science echoed my concerns. “We find that mobile phone bans have very different effects on different types of students,” the authors wrote. “Banning mobile phones improves outcomes for the low-achieving students … the most, and has no significant impact on high achievers.”
… analyses of other academic metrics seem to support limiting students’ smartphone access, too. Researchers at Kent State University, for example, found that among college students, more daily cellphone use (including smartphones) correlated with lower overall GPAs. The research team surveyed more than 500 students, controlling for demographics and high-school GPA, among other factors. If college students are affected by excessive phone use, then surely younger students with too much access to their phones and too little self-control and guidance would be just as affected academically if not more.

And here is an article from the Atlantic that highlights some of the consequences of the constant barrage of social media.


The more I pored over yearly surveys of teen attitudes and behaviors, and the more I talked with young people like Athena, the clearer it became that theirs is a generation shaped by the smartphone and by the concomitant rise of social media.

https://quote.ucsd.edu/childhood/files/2013/05/turkle-tethered.pdf
Book by Sherry Turkle “Why we expect more from technology and less from each other.”